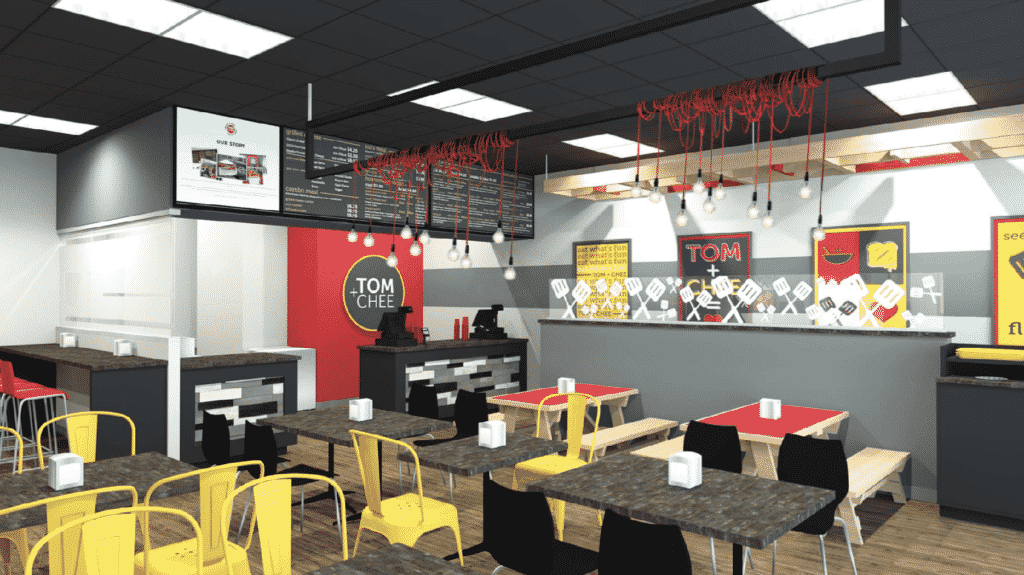 After closing nearly two dozen units, the sandwich and soup concept is reentering growth mode under GSR Brands ownership with a smaller prototype and renewed focus.

Two years after its acquisition by GSR Brands, grilled cheese and soup concept Tom & Chee is getting a makeover that includes a smaller footprint, new menu items and updated branding.

Cincinnati-based Tom & Chee, which gained notoriety after an appearance on the “Shark Tank” reality TV show in 2013, once had 35 locations. It was down to 23 units when GSR Brands (the parent company of the Gold Star Chili chain) stepped up to buy it in 2017.

Today, there are just a dozen Tom & Chee restaurants scattered across seven states. But the brand is poised to return to growth mode later this year when a new, scaled-down prototype is slated to open in Cincinnati. Five units are currently in the development pipeline.

“Pre-acquisition, what happened to the brand is that they had tremendous growth and didn’t have the infrastructure to support it,” David said. “They just felt like they needed that type of facility to handle the volume. … The lines went away, and the volume started to stabilize. The guest experience, when walking into the store, was overwhelmed with communication. … You got a lot of people walking in, just staring at the menu board for way too long.”

Much of that square footage savings has been created in the back of house, where Gold Star executives spent months researching space-saving and high-efficiency cooking equipment, LiCalzi said.

New stores will use high-speed ovens, instead of steam shell grills, which not only increase consistency and quality, but also take up less space and cut sandwich-cooking time from three-and-a-half minutes to 65 seconds, he said.

“The ROI has been drastically modified to create a more compelling franchisee model,” he said.

The redesigned prototype will also include an off-premise pickup area, with a holding box, as well as redesigned workstations for to-go and catering orders created via time-and-motion studies.

“We took our learnings from our Gold Star brand and really focused on ergonomics,” LiCalzi said.

The brand is undergoing a stylistic facelift as well. Gone is the plus sign that once separated “Tom” from “Chee” in the name. It’s been replaced by an ampersand, which executives hope will translate more readily with consumers. Also, the new prototype moves away from bright, bold colors and slogans to a more subdued environment of warm wood tones and greater explanation about the menu.

“If you look at the concept prior to us acquiring it, it was very much focused on primary colors and loud graphics screaming at you,” David said. “We didn’t think that experience matched the food.”

In addition to the scaled-down footprint, Tom & Chee’s menu has been shaved to a core focus of about 10 melt sandwiches (down from 15 or more), along with a smaller selection of build-your-own ingredients.

The concept is moving away from messaging that focused on grilled cheese sandwiches to one that highlights “melts,” David said, which connotes a more-upscale experience.

The chain has built upon its popular grilled cheese doughnut line, with a s’mores variation.