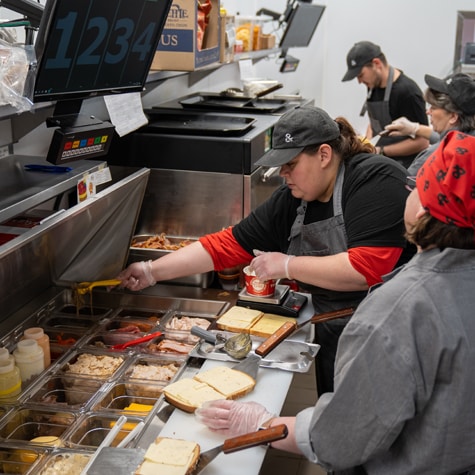 “The hallmarks of a great test kitchen start with the right equipment lineup, flexibility and a space that invites food experiments.”

In the November 2020 edition of Foodservice Equipment & Supplies Magazine, GSR Brands’ test kitchens for its two franchise businesses, Gold Star and Tom & Chee, were among those featured for new approaches. Test kitchens are an important part of menu development and equipment selection for any restaurant operation. From the article:

Five years ago, execs at GSR Brands, operator of the Gold Star Chili and Tom & Chee chains in Cincinnati, converted a portion of its office space into a 400-square-foot test kitchen for testing and developing a new line of burgers. The space has been put to use for other needs since then, including a successful vegetarian chili, according to Dave Mayerik, vice president of operations.

The layout and equipment lineup for GSR’s test kitchen reflects that of a traditional location kitchen, albeit on a smaller scale.

GSR used the kitchen to test a new chili-retherming process, incorporating a multiuse, energy-saving tilt skillet with a smaller footprint versus a larger steam-jacketed kettle that was running as much as 12 to 15 hours a day. On-site, staff boil water in the tilt skillet to heat up vacuum-sealed bags of chili prepared at a central commissary. “The tilt kettle is very versatile; we can also use it to brown meat for the chili testing process,” Mayerik says. Now, “the majority of our food on the Gold Star side comes off steam tables and a tilt kettle we use to heat up our chili.”

In addition, the test kitchen features what Mayerik describes as a “super microwave” that was recently added to replace a steamer that was previously used to warm burger buns. “We have also brought in different ice cream machines for testing and different griddles when testing the burgers,” Mayerik says.

Tom & Chee brought new combi ovens into its test kitchen to try a new way to toast sandwich bread, melt cheese and heat the proteins all in one space with less hood requirements, according to Tyler Kraemer, GSR Brands’ director of training. The result was a reduction of the cookline by about 10 feet. “This has been a success for us, and we are in the process of rolling out that new equipment right now,” he says. “This is revolutionary for our concept because it cuts the cooking time down to almost a minute and 20 seconds. We’re also testing another method where we would use pretoasted bread from a convection toaster and then build the sandwich and put that in the combi to cut cooking time even further while maintaining high quality standards. This could be huge for our franchisees from a cost-savings perspective.”

Test kitchens have always been an important part of menu development and equipment selection. As labor and food cost challenges abound, compounded by a pandemic and corresponding economic recession that have hit the restaurant and foodservice industry hard, these kitchens will remain workhorses in helping operators figure out smarter, more cost-effective ways to run operations. Now more than ever, that bottom line can mean the difference between staying in business or having to bail out.